Issue: I tried to use the camera feature on the latest citra build. I set my camera config as “Still Image (image)” and checked “Prompt before load” to enabled. But when I press “Click to preview” and put my image on, no matter what size the image is, it doesn’t seem to be scannable at all.

And of course, the image was unscannable in the game.
I even tried to change “Camera to configure” from Front to Rear. But everytime I press OK to save the changes and leave the config, it automatically resets the camera config to Front. Is there anything I can do about it? Even in the config.ini, there’s no option to change Front to Rear. Help me plz!

Enter a description of your issue here, in full detail.

So you can select which camera to configure and that isn’t even a setting for Citra cameras?

RIP this doesn’t work either. I think the size of the image doesn’t matter unless my camera configure changes to Rear … hmm

So I finally found a solution to this. (Make sure your camera settings be like this.) 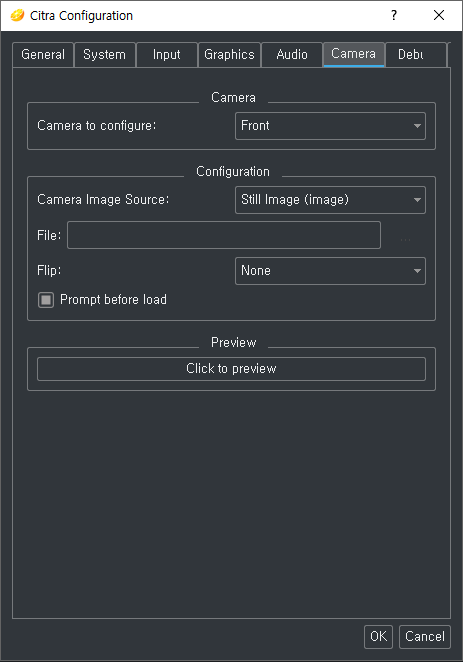 It works for me while playing pokemon alpha sapphire. I didn’t test on other games but I bet it’s worth to try.

So you are saying that everytime I launch a different game, I should change the camera which the game uses?
Cuz every game uses different cameras and it won’t be good if I configure the wrong camera?
And that’s not a setting even the word setting means adjust to operate a machine?

Huh. I’m not good at English. Sorry.
Please have a look at the ini.

What I mean is, the 3 cameras may have different configs, and you can configure each of them.
However, if we put all those options in the config widget, the widget would get too crowded with lots of similar options.
So we have a selection of which camera you want to configure.
For example, when you set camera to configure to Front, you configure the Front camera.
When you set it to Rear, you can configure the Rear camera.
When you press OK, your settings for BOTH front and rear will be saved, nothing lost. And games can choose to load any one/two/three of the cameras. When game loads Front camera, we use Front camera config. When game loads Rear camera, we use Rear camera config.

tl;dr: That option is just for you to select which camera to configure. All cameras are always enabled and games can load any of them.

And, for your “solution” above, someone has already mentioned it before; It’s just a matter of size, in fact.

You did not understand the configuration correctly, but fortunately your way to configure was correct.
You changed the Camera to configure to Rear and saved it. So Rear is configured.

i made it work, you need to configure all cameras the exact same way for them to work, other wise you will get balck screen

No, that’s not the case. You only need to configure the camera the game is using.

Hi, if u need a QR for Pokémon USUM, click here: Compatible and simplified QR codes for CITRA (Pokémon USUM)

hey guys. my problem was i can’t upload files on the configuration box. just like in choi choi’s pic “solution” (camera settings ) those 3 dots on the file box were inactive. no matter which i choose, front or rear, or in the image source, still image etc., i can’t upload files because i can’t click that box. so what i did was i unchecked the prompt before load and problem solved. i’m using citra nightly 800.

Here, if you enable “Prompt before load”, then instead of loading a fixed image every time, Citra will ask you to choose an image on your computer when the camera is loaded. So you needn’t choose an image when the option is enabled.

but i still am facing problems.

Can anyone plz help again

Issue: citra recognize the QR code but the QR in code in game doesn’t work and stay in black what should i do?