I’m experiencing a black screen on the Citra camera no matter what I do with the settings. I’ve only been able to find one thread with the exact issue I’m experiencing, and it was from 2018 for ACNL, the same game I’m struggling with. The only solution at the time was “sorry, can’t do anything about it”. Since it’s been four years and this issue is still occurring, has there been a fix for it?

Here’s a screenshot of the problem. I’m using an unbranded USB camera. This camera has no problems with any other programs. 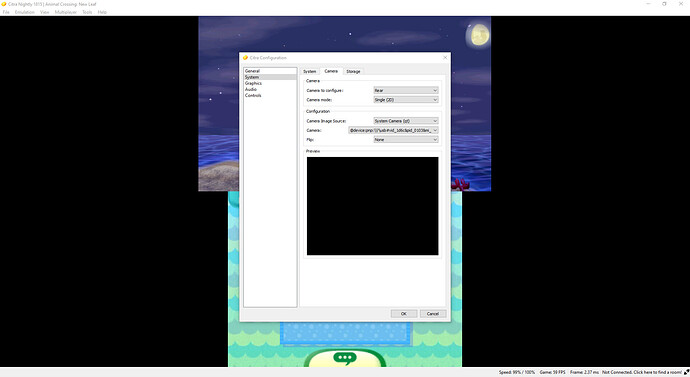 This is a known issue, we’re currently waiting on a fix. Sorry for the inconvenience, hopefully this will be fixed soon!
In response to the thread you found in 2018, it was fixed back then but this issue now is relatively new.

Alright, thank you for the response! Would it be possible to use an older version where this issue doesn’t occur or is that not recommended?

Yeah, it’s perfectly fine to use an older version in the meantime.
Download citra-windows-mingw-20221001-7d18e36.7z from Release nightly-1789 · citra-emu/citra-nightly · GitHub
Extract the .7z file and run citra-qt(.exe). All of your save files and such will transfer over.