Issue:
In this game there is a part where you need to follow a certain bird shadow, but as of nightly build 1285 it won’t appear. I’m positively sure I did everything needed on the game for this event to happen.

On an older topic in this forum someone suggested using an older build, but I couldn’t load the savegame from it. I tried overwriting (made a backup before) the citra directory but it just bugged a bit. 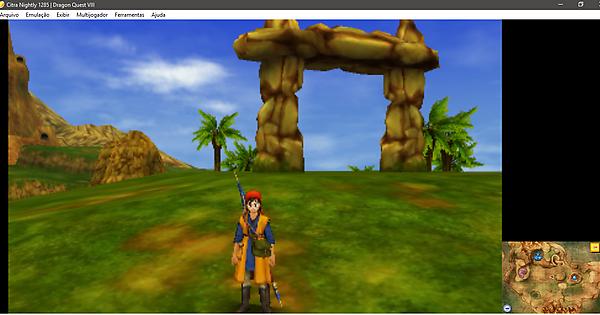 Is it just a graphical error where the event is occuring but the shadow doesn’t render? If so, just walk over to where the dark portal normally appears (It’s always in the same place, unless the 3ds version changed things). If the event itself isn’t occuring, that seems unlikely to be a problem on citra’s end.

The event is happening since I can hear the bird’s screech. But I’ll try to walk straight to the portal

Try disabling hardware shaders. The game will slow down, but you might be having a graphical error with it. (This also might be one of the few edge cases where accurate multiplier would also help, but I doubt it. If you want to try that first, do so before turning off hardware shaders) (These settings do require citra to reboot)

Disabling hardware shader made this lovely bird appear on my screen lol https://imgur.com/LZmx0CE

Disabling hardware renderer at all WILL make the shadow appear but it’ll slow down the emulation to like 5% speed, making it impossible to play

I don’t know if this helps but this is where someone suggested to use an older version. I just don’t know how to load the savefile from the newer version so I can get past this part.

I am playing Dragon Quest 8, which is listed as working perfectly on Citra. There is a part of the game where you have to follow a shadow on the ground, and for whatever reason, the shadow is not loading. When looking at the popup console logs, it shows the following: [CitraProblem] I am pretty sure that it is a problem relating to my graphics setup, but I couldn’t think of anywhere else to ask. Help would be appreciated, thank you for your responses!

Interesting. It looks like it’s some OpenGL stuff we didn’t get done. The older version might help then, you should be able to find that on the site under manual downloads. should be able to swap back afterwards as well. As old as it is, however, it’ll probably be significantly slower.

I used the older version on the linked topic, but when I load the savefile it will freeze the emulator after 2 seconds.

I will try to move the Citra files to a more potent computer and try again.

Hi, I read through the log and your GPU doesn’t support the OpenGL extension that we require to render that specific kind of shadow. That’s not surprising considering your GPU is the first generation from Intel to support OpenGL 3.3

Hey, it took me a while but I tested it on a newer and better computer (with a geforce 1060) and the shadow was there just fine using the nightly build 1285. I didn’t need to use an older version. So it was really an old harware issue.

Hey guys, sorry for necroing this, but I have the same problem with the Android build. I have Snapdragon 865. Any solutions?

hello, I have the same problem, I can’t see the birds shadow as it won’t appear