(If something is wrong here, im sorry, I’m not the best here)

So yeah, my problems are basics …

First, the cursor is “lock” which is basically the fact that I can use the left stick to move Pit around, but the right stick make the cursor move AS WELL as Pit, which make it super difficult to play the game since dodging is an important thing in the game …

Second, I have a problem that after playing a little, when I tend to hit the D-pad buttons on the left (to do a special attack for example), Pit starting shooting forever and seems like the only button making him stop is the “R2” button consider the “ZR” button and only this one.

If someone can help me find out why these 2 things are happening, that would be great

I am not sure if that helps at all neither if I understood fully what you are saying CitraBot, very sorry …

Oh and since im replying, I should tell im french first, so all im saying may be sometimes a little hard to comprehend XD

Anyway, still waiting for an answer

Close the game, go to Emulation > Configure > Controls and on ‘Circle Pad’ click on ‘Set Analog Stick’ follow the instructions using your left analog stick. do the same for the C-Stick but using your right analog stick.

Just tried, nothing seems to have change …

Oh and the control menu haven’t change that much when I try what you said, maybe I don’t understand what they mean to do when they say "Move the Stick to horizontally than vertically after even im pretty sure I do …

Well, the point of the game is (on 3ds) to use the bottom screen to move the cursor since there is only the left stick to move the character, so idk how this translate exactly in the emulator X)

Maybe Ill try to invert the 2 sticks, who knows, this may work … may …

So I just tried, of course i didn’t expect much result and it didn’t work …

Tho, the problem about Pit shooting forever seems to really been lock on the R2 button on my Ds4, so I jsut delete the control, not sure if it helps 100% tho

oh ok, the DS4 can present some issues, configure your keys manually by following this guide:

oh yeah that page, I try using this at first but it wasn’t working until I configure myself …
Maybe I’ll give it a shot again …

But yeah, maybe I should have told that I use a Ds4 at first X)

the problem may be that the ZR and ZL as R2 and L2 is that they both have a magnitude (-1.0 to 1.0), which it may already be recognized by citra as pressed. you could try to hold the R2 or L2 right before clicking on the ZR or ZL and when it ask for you to press it, just release the button.

do that with the game closed, configuring while the game is opened can cause issues.

Not bad of an idea, gonna try that, later Ill try the game tho … right now Im kinda watching a live, the game running at 10 fps when so XD

Finally, I gived up and try immediatly, seems like the problem with the R2 is fix, Pit is now okay from the “non-stop shooting” glitch

Still having problem for the tactile screen, I still have no idea how to make the right stick to make move my cursor

After the last tries, I notice that the right stick does not do anything actually, the point would be to make the right stick to move the cursor that i usually use the stylus for, not sure how you do that X)

it occurred to me right now, if i remember correctly, you can use the touchpad of the DS4 for touch too… which may work better than the left analog stick. its quite easy, follow this guide:
https://cemuhook.sshnuke.net/padudpserver.html

choose the appropriate method (either ScpToolkit or DS4Windows depending which one you are using). afterwards open citra and go Emulation > Configure > Control > Motion / Touch and set the 'Touch Provider and CemuhookUDP.

Well, this may be a solution, but I don’t think its a good idea …

I have no idea if you ever play Kid Icarus Uprising but using the pad of the DS4 to move your cursor seems like a REALLY BAD idea, I just want the tactile part of the screen to be usable with my right stick, that is all sorry.

Also, idk why you say “Left analog” stick since the left analog is to move the character around, not the cursor …

Anyway, thanks for the guide about it, this can always have an use for another game ,

I will work on that when I got time later, I’ll give feedbacks just after trying it, probably more in the afternoon (its 8:30am here so in 4 hours or so)

So hum … hi again, been 3 days, I am very sorry X)
I got kinda into exams so I had not much time to do stuff …

Anyway, I tried what you told me bio3c and seems like it works but at the same time I put my touch into it …

Basically, I tried your idea first, it works but wasn’t the best so I then tried to configure the game like I was a left-hand person …

Good news is : I got the cursor on the right stick, and everything is almost fine …

The bad news is : I can’t use the left stick anymore to do stuff so I had to use the D-pad to move Pit around … not the best but it is the better I have

Well, it is working (kinda) but if anyone have ANY other idea, Ill be glad to listen to them and try them out, for now Ill let 2 screens of for people to see how I configure the game controls if they want it to works for them :

Little summary of what I said 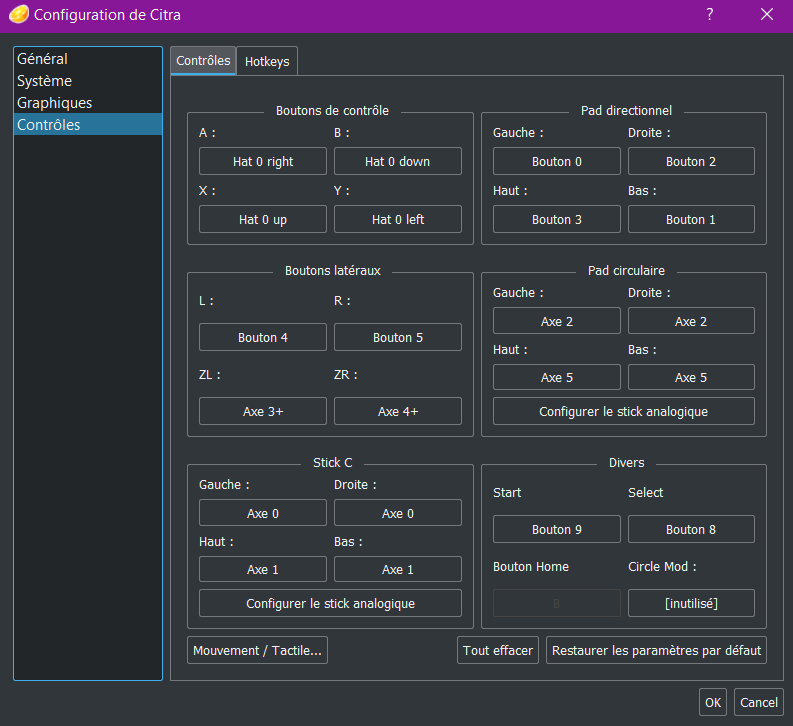 Controls in the game :

Edit : I just realise that all is in french for the screenshots, my bad XD
… but im sure people can still figure it all out, the stuff are the same