Issue:
Enter a description of your issue here, in full detail.
When I boot Pac man and the ghostly adventures 2 the splash screen runs fine but when I go to the title screen it slows down too much. 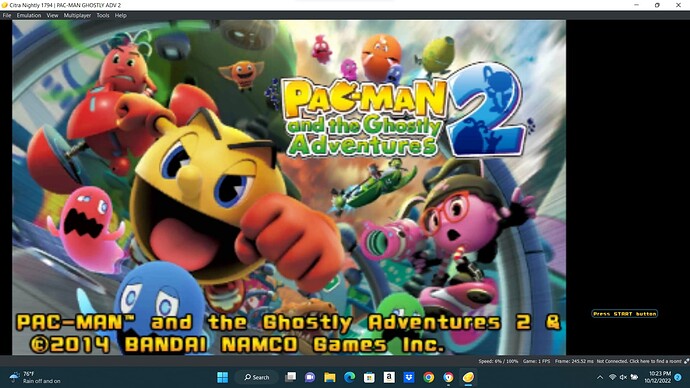 With those games, you’ll need to wait for emulator improvements. They have more than just performance issues.

why is this game hard to emulate

was the game coded poorly or something

That’s 10 times the more SLOWER IT GETS.

hopefully those games will run better in the future

Your hardware isn’t the issue. Keep in mind that emulation isn’t the same as running games natively. There’s a lot more that goes into it. For example, if you want completely accurate sound emulation, switch the audio to LLE. It’ll slow your games down to 1-5 fps in most titles. This is why we have a less accurate, but more performant version of it. Accuracy costs performance, that’s the general rule. But be too inaccurate, and you risk losing stability. It’s a difficult thing to balance.
So emulating isn’t as simple as just plug-and-play. Every game behaves differently depending on their design philosophy and game engine. So what might make one game run at 500% emulation speed, may slow another down to a crawl. This is why we reverse engineer how the 3DS does things exactly and implement those things as best as possible, so that most games behave similarly enough. But obviously, there’s still work to be done. You mentioned LM3 (Dark Moon), which requires an entire rewrite of our CPU slice scheduler to fix. Just to fix one game’s performance, a significant portion needs to be rewritten. Which requires time, expertise, testing on 3DS, testing on Citra, testing, testing, testing.

This is why some games take years to fix. What may sound like an easy thing to fix, can be one of the most difficult and time consuming things to fix.